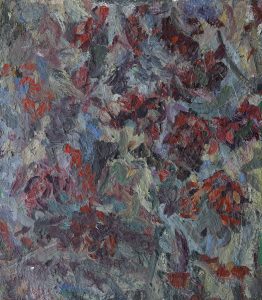 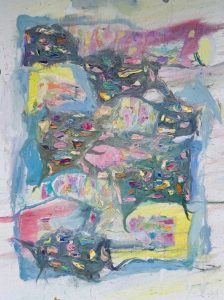 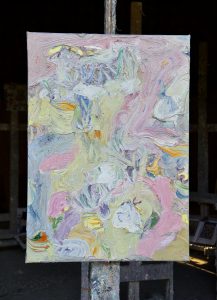 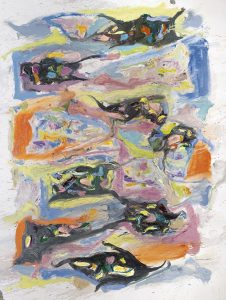 Marc Mulders (1958) trained at St. Joost School of Art & Design in Breda. Mulders is a versatile artist; he is a painter, a watercolourist, a photographer, and a glazier.

In 1995, Marc Mulders relocated to an old convent school in the heart of Tilburg. In his pastel-coloured oil paintings, he allows himself to be guided by the rhythm of nature. Marc Mulders lives and works according to tight schedules – not only in his daily routine, but also in his choice of subjects. In spring and summer, he paints flowers, such as tulips, lilies, irises, and peonies; in winter, he focuses his gaze on wild animals such as pheasants, fish, and hares. And once he has selected a theme, he usually creates a series of paintings. Marc Mulders, a religious man, is fascinated by profound themes such as life and death. He is inspired by painters such as Rembrandt, Chaïm Soutine, and Vincent van Gogh.

Marc Mulders is also an expert in making stained glass windows. In 2004, he designed the piece A Garden of Glass for the Nieuwe Kerk in Amsterdam to commemorate the 25th anniversary of Queen Beatrix’s reign. Two years later, in 2006, he created the large stained glass window The Last Judgment for St John’s Cathedral in ‘s-Hertogenbosch. He also recently collaborated with designer Piet Hein Eek to create a contemporary version of centuries-old stained glass.

Relocation to the Baest country estate

Ten years ago, Mulders left the hustle and bustle of Tilburg’s city centre for the peace and quiet of the countryside. This move to a rural environment also marked a change in his style of painting and his choice of subjects (he no longer paints dead animals). From his beautiful studio, a farmer’s barn on the Baest country estate, he can admire the expansive flower fields. Mulders no longer observes the flower from close up, but rather the vista above the fields. The changing light has also become a key motif: dew, mist, sunshine, and backlight. This new perspective has led to more abstract canvases, in which the richness and beauty of nature plays an important role.

Marc Mulders has an affinity to the French impressionist Claude Monet. It is therefore hardly surprising that he refers to his own garden as ‘my own private Giverny’, a nod to Monet’s famous garden in Giverny, the charming French village seventy kilometres west of Paris. According to Monet, nowhere else in the world does light shine so beautifully. Over the years, Mulder’s palette has become increasingly lighter. The subdued colours of old have given way to white, yellow, and pastel tones such as lilac and pink.

When he paints, Marc Mulders is not only surrounded by the scents and colours of the expansive fields, but also by many books – from those published to accompany the Dutch television series Paradijstuinen (Gardens of Paradise) as well as those by the American abstract expressionists Helen Frankenthaler and Willem de Kooning, and the fashion magazine Vogue. He tears out images and staples them next to the canvas, to serve as support and kindred spirits throughout his painting process, which often results in floral abstracts.

Mulders often applies thick layers of paint across the breadth of the canvas. The works burst with a bubbling energy, revealing the unequivocal beauty of nature. But at the same time, there is a realization that decay is looming. The short life of a flower symbolizes our own mortality.

Marc Mulders is one of the most successful contemporary Dutch painters. His paintings are exhibited in twenty museums, including the Stedelijk Museum Amsterdam, Kunstmuseum Den Haag, the Noordbrabants museum, and De Pont museum in Tilburg.