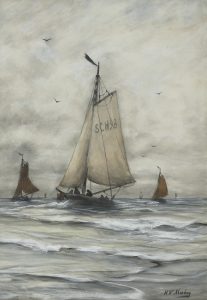 Hendrik Willem Mesdag one of the best seascape painters

Hendrik Willem Mesdag (1831-1915) is one of the Hague School’s most prominent artists. As an artist, Mesdag was a late bloomer. He started his career as a stockbroker, which is perhaps not so surprising considering that his father was a banker from Groningen. Hendrik Willem Mesdag was 35 years old when he finally decided to follow his heart and focus entirely on art. To pursue his passion, he moved to Brussels to follow a three-year art course. From the end of the 1860s onwards, he turned his attention to seascapes and beaches. At that time, he rented a room in Scheveningen with a beach view to study scenes in nature. In 1869, he moved permanently to The Hague to work as a painter.

Hendrik Willem Mesdag is regarded as one of the best seascape painters the Netherlands has ever had. One of his contemporaries said of his paintings: it is ‘as though we can feel the salty sea air penetrating our nostrils and lungs, we can feel the fresh breeze blowing through our hair, we can hear the waves rippling and raging.’

He painted hundreds of seascapes. He painted the sea in all seasons, at all times of the day and in all weathers, with or without a beach, with or without boats. He painted boats on the high seas, in the breakers, and as they were pulled onto the beach, as Scheveningen did not yet have a harbour at the time.

Mesdag painted all aspects of the fisherman’s life: shrimp fishers, shellfish fishermen, lifeboats, and most of all, fishing ships setting sail or coming home. The hustle and bustle on the beach was another of Mesdag’s favourite subjects. The fisherwomen in traditional Scheveningen attire carried out their jobs on the beach, they waited for the fresh fish to be unloaded and sorted, and horses pulled the carts.

In 1870 he won a gold medal at the Salon de Paris for his seascape Breakers on the North Sea. In the decades that followed he was selected on multiple occasions to take part in this exhibition as well as the Venice Biennale.

And of course, we all know Hendrik Willem Mesdag from the famous Panorama Mesdag (1881), which is still open to the public today in The Hague. The Panorama, a historical monument for which Mesdag used trompe-l’oeil, is a panoramic view of the sea, the dunes, and the old fishing village with its burgeoning seaside resort. Measuring 120 by 14 metres, it is the largest painting in the Netherlands. His wife Sientje van Houten – the Groningen artist whom he married on 23 April 1856 – also contributed to the huge work of art, as did George Hendrik Breitner.

Mesdag was not only an accomplished artist, but also an avid collector of art. He had a penchant for paintings by the Barbizon school of painters. He donated more than two hundred works of art to the Dutch State.