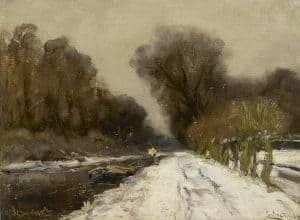 Snowy forest path along a canal 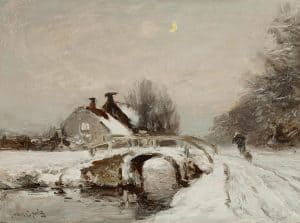 Louis Apol was born in The Hague in 1850. Apol specialized in painting landscapes at an early age. In doing so, he followed a typically Dutch tradition that emerged among seventeenth-century landscape painters such as Hendrick Avercamp and Aert van der Neer. Although Louis Apol also painted autumnal and summer landscapes, his main focus was winter landscapes. His big breakthrough came in 1875, when the Rijksmuseum bought his monumental painting entitled A January Evening in the Woods of The Hague.

At the age of fifteen, Louis Apol was taught by the Romantic landscape painter J.F. Hoppenbrouwers, whose influence can be seen in the intricately painted winter scenes Apol painted in the seventies. When the artist made his debut at the Salon for living masters in The Hague in 1869, fellow painter Andreas Schelfhout prophesied ‘that boy will go far’. Louis Apol soon received recognition courtesy of a royal grant, and he successfully displayed his work at exhibitions.

He had established his reputation as an artist and was soon able to demand good prices for his work. In 1880, he sailed on the ‘Willem Barentsz’ to Spitsbergen (Novaya Zemlya). The many sketches he drew there provided him with inspiration for paintings for the rest of his career. Louis Apol was reserved in his landscapes: a lone walker on a path, a sleigh in the snow, or a horse-drawn carriage loaded with timber in a winter forest. Over the course of the 1880s, Louis Apol’s brushwork gradually became more loose. His later work can justifiably be regarded as impressionistic. Details did not concern him; rather, he endeavoured to capture the mood of the tranquil landscape as effectively as possible. His atmospheric winter scenes rivalled those of his older colleagues in the Hague School. His paintings were often sold to buyers in English-speaking countries through renowned art dealers such as Goupil and Van Wisselingh. Goupil’s sales ledgers at its Paris headquarters reveal his broad popularity with collectors and art dealers in the Netherlands as well as the US, Germany, and Great Britain. Both Queen Wilhelmina and her mother, Emma, owned works by Louis Apol. However, owing to the high level of interest, people soon began to imitate his work, even during his lifetime.

Louis Apol became the master of winter landscapes in the Hague School. He received several accolades for his work, including a gold medal at the World Exhibition in Barcelona. Louis Apol’s paintings feature in the collections of almost all major museums in the Netherlands.