Cornelis Springer (1817-1891) was a Romantic artist. He always let himself be guided by his emotions rather than his reasoning. At a young age, Cornelis Springer started an apprenticeship with a painter and decorator, which was the path that his parents had envisioned for him. Once his creative talent was revealed, he started attending lessons at the city art school.

Initially, Cornelis Springer focused on painting unspoilt landscapes. In those days, nature, and in particular unspoilt and untainted nature, was regarded as a tremendous asset. But Springer particularly excelled in meticulous depictions of cityscapes and village scenes, and it is these paintings which won him great acclaim. The light that falls on the façades is often soft and warm. The sky is clear, and the sun shines like it does on the most beautiful summer days. The people depicted in his paintings are often members of society’s elite and are usually dressed according to the latest fashions.

Cornelis Springer spent most of his life in Amsterdam, but he travelled throughout the country for his work. He would stop to draw elaborate sketches of monumental buildings, churches, and squares, often down to the smallest detail, which he later used to create oil paintings in his studio. He became interested in buildings and architecture through his family; his father was a carpenter and contractor and his eldest brother worked as an architect. He taught the young Springer everything about perspective and how to draw buildings.

What makes his paintings special is that they are, generally speaking, very truthful. However, he did permit himself some freedom to leave out elements that bothered him. Thanks to his keen eye for detail, he succeeded in depicting the architecture of towns and villages in a lifelike manner. Alongside depictions of existing buildings, there are also works featuring houses that he imagined himself. This fantasy architecture looks incredibly realistic, it is almost as though the buildings actually existed.

Springer’s paintings were well respected and admired by his contemporaries. During his lifetime, Cornelis Springer was a highly respected artist, both in the Netherlands and abroad. His work is also popular today. Springer’s paintings feature in many museum collections, including the Rijksmuseum in Amsterdam, the Teylers Museum in Haarlem, and the Zuiderzee Museum in Enkhuizen.

Currently we don't have paintings by Cornelis Springer in our collection.
View current collection » 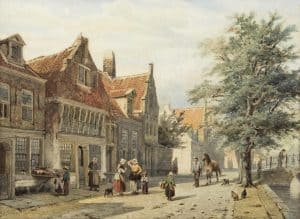 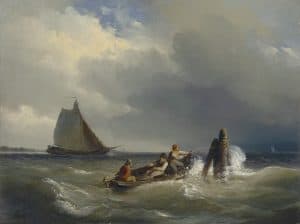 Figures in a rowing boat on turbulent water » 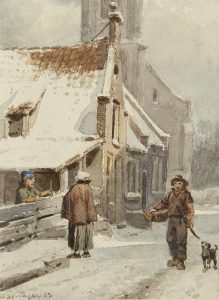 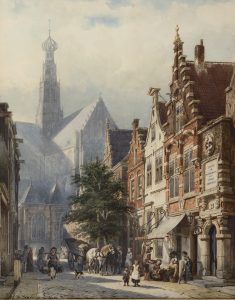 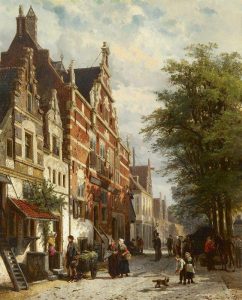 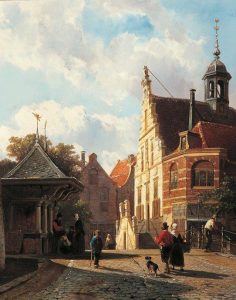 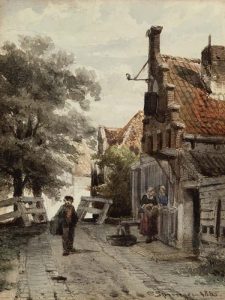 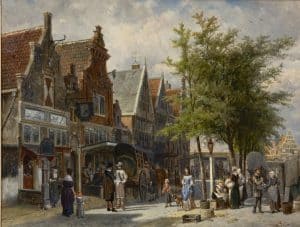 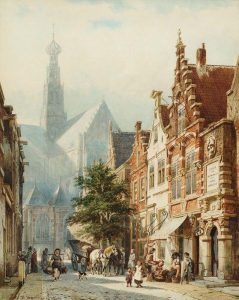 Daily bustle at the St. Jans-street in Haarlem with the St. Bavo Church in the background » 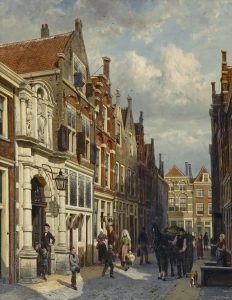 Entrance of the Municipal School the Vriesestraat in Dordrecht » 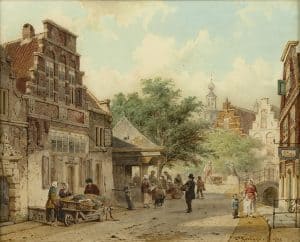 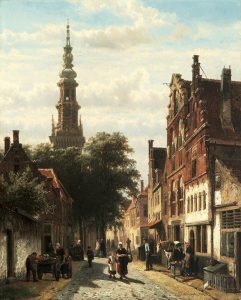