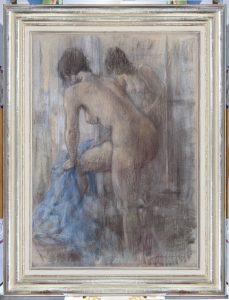 Standing nude in front of the mirror 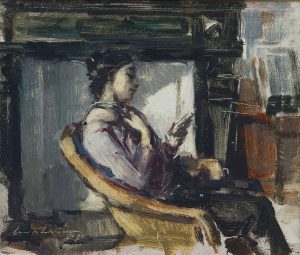 Life model drawing, it was Sierk Schröder’s daily bread and butter. It was a fascination that had captivated him from an early age, and that kept him under its spell until the end of his life. He is best known for his portraits and intimate interior scenes. For him, sketching a subject, be it a person, a portrait, an animal, nature or a landscape, was a daily routine as well as a daily challenge. He strived for academic perfection, by using his technical skills, keeping the ‘soul’ of the subject intact. That, he found, was the tricky part; academists regularly lose track of the objective when creating a technically advanced picture. It becomes lack-lustre, without a soul.

Sierk Schröder remained a true to his art, figurative drawing and painting. Something that – especially in the fifties and sixties- was considered old-fashioned by many of his peers, art critics and collectors. In 1960, he was appointed as professor Artistic Painting at the Royal Academy in Amsterdam. There was a gap between Schröder’s views and ideas, and those of his students, and they clashed regularly. His students sought the dialogue and were looking for innovative ways to create, rather than gaining knowledge of the traditional techniques.

From 1970 onward, a new creative era began. He moved into a new atelier above the café Riche, at the Buitenhof 5 in The Hague. He chose to do less assignments and focus more on his own artistic work. Schröder has always acknowledged being influenced by other, past artists. His interiors with women sitting and reading, are reminiscent of Breitner, and Degas’ hand shows when he depicted bathing girls.